ADR index at 38.2% retracement has completed a 5 wave advance in wave C of a Flat. A Flat is a corrective move marked in 3 waves A-B-C, and with internal waves 3-3-5. Remember the previous decline was very impulsive and this index was the leader to the Bear market last year because world equities were falling way ahead of the US stock market. So even now as the US stock indices are at new records this index has retraced no more than 3 waves in wave B and that by itself has very bearish implications unless something changes.

The 5 wave decline in the World index last year has a small overlap and therefore I have marked it as a leading diagonal. That means the fall is withing two wedge like lines that are converging.

A leading diagonal is usually wave 1/A of a trend. It is usually followed by a retracement that breaks out of the diagonal before the bear trend wave 3/C down starts. Wave 3/C after a leading diagonal can be very fast and furious, often 3 times the speed. So it is not something to be taken lightly. Right now we are simply waiting for signs that wave C down has indeed started. Once it does and gains momentum we should be below the wave A low in 1-2 months.

This pattern playing out would have far reaching implications for World equities. Looking at all of them together I find the weakest links in the Euro zone especially Italy and Portugal followed by Spain and France. After that second would be once again the same commodity producers as a potential dollar rally drags down Commodity prices one last time. 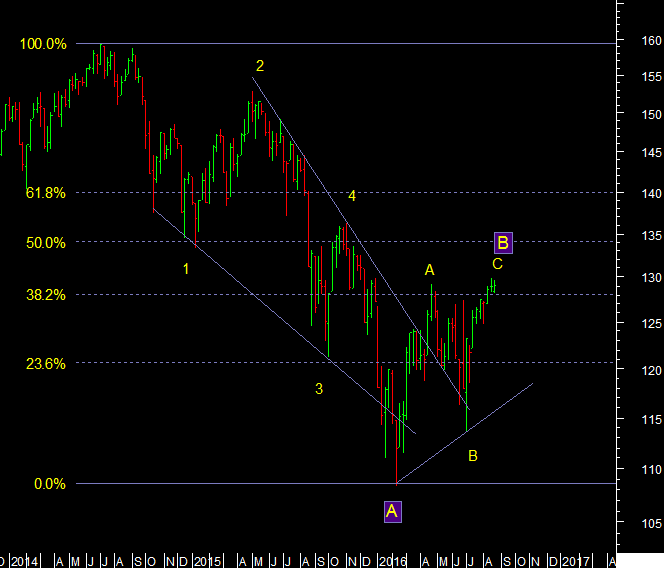 The US market itself at some point too has to be part of this mess as this chart of the dollar Crisis that I put out explains that this is just a replay of 1995-2001 when the Dollar was in an uptrend. The first part of the Dollar rally saw a move of Dollars into the US and many world markets like SE Asia and Russia faced a crisis. However after the Tech bubble was done in the second Dollar rally had all world equities in a Bear market. So after a year long consolidation when the Dollar starts another furious move up it might look the same.