The Dow - closed Down breaking the shelf support created in March 2018. So we are now below that in both the Dow and the S&P. At the same time the sentiment is at a near term extreme at 8% bulls for the last 3 days. Sentiment can remain poor in a crash but now that we spot a five wave decline even if it is overlapping, as is the case in a leading diagonal, we may have a near term bottom. I say may, and the holiday season is good reason. A small retracement of this leading diagonal to the wave iv high of 24057 or with a best case retest of the 20dma near 24400, could develop. The last two rallies in Oct and Nov came off lows in sentiment but neither lasted. This one might be smaller and should not last beyond 31/12/2018. What is interesting though is that we did achieve equality as shown by the boxes where 3=1, a bull can argue C=A bottom done. However wave 3 can be extended. The coming bounce itself will give clues as it should be 3 waves up. In any case the five wave decline being a leading diagonal is directional, leading diagonals occur in wave 1 or A of a trend, at the start and not the end, so it should mean lower prices eventually. 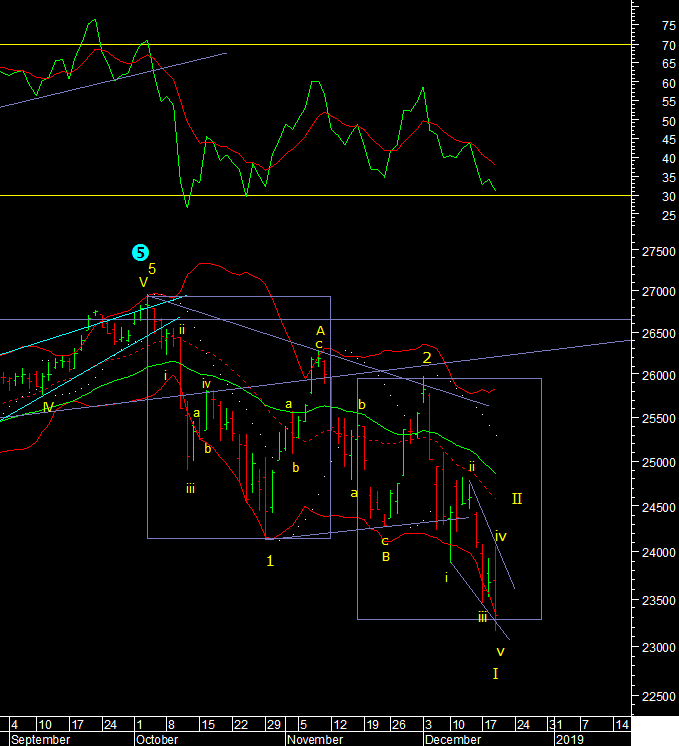