This is a chart of the Dow since 1929, with a reworked count. The Dow is in its 5th wave since 2009. The thought that the rise is a B wave was discarded at many fronts. First by going above the 138.2% of A mark, and second by the new highs this year that make it a 5 wave rise as seen in the next chart below. Note that each US index has variations. S&P crossed the 138.2% mark much earlier. The NYSE composite can be marked as a 5th wave in 2008  and has not seen significant new highs since. The Dow is also pushing against the upper line of the rising channel since 1932. This line was resisted by both wave 1 and 3 circled in the past. The 3rd wave of the 5th broke above it and now the 5th is pushing at it. This change also ruled out the possibility that 2000-2016 is an expanding triangle [some call it Megaphone], because elliott wave wise a triangle is 3-3-3-3-3, and with the 2009-2016 move now 5 waves it is not 3. 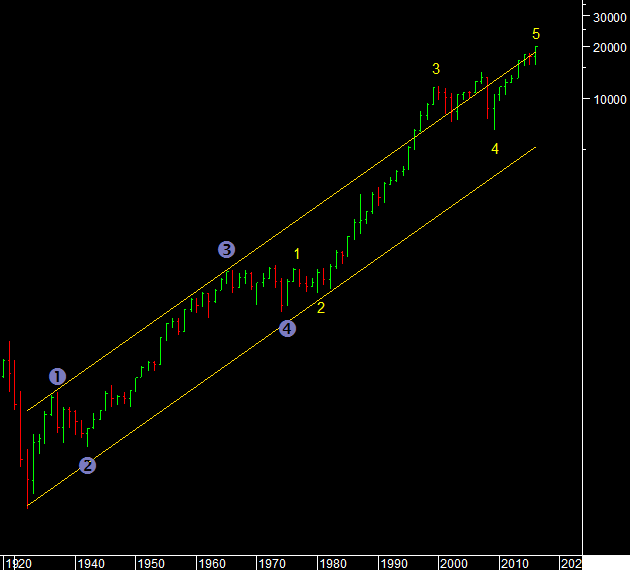 You have seen my recent notes that the 5th wave of 5 is an ending diagonal on the S&P and NYSE Composite, at least till now. However the Dow has gone up much more and does not fit that pattern. The Dow however is at the upper end of a rising channel from 2009 within which it has 5 waves and at the upper end of the channel the targets are met. While prices are stretching we are near the quarterly upper Bollinger band above 20k. So the question remains when will the 5th wave roll over and turn down. The S&P did not confirm the new high in the Dow yesterday and that can be a short term inter market divergence that can be giving clues. Daily momentum is also now falling and negatively diverging from price across indices. So we wait to see. However to come up with a valid count for the Dow instead of a ending pattern, I have taken the 2016 initial recovery as a running triangle in wave 4 subdivision. This awkward but no other choice. Alternately if the Dow continues to rock higher then it would extend and breakout of the channel as well on the upside. EWIs current counts do suggest that. But I wont jump to that conclusion yet as other indices do not confirm. Also with the 3rd wave extended there is no need for the 5th wave to extend. In fact wave 5=38.2% of waves [1-3], yellow lines =20130, and that is the minimum Fibonacci requirement when the 3rd is extended. So till we get new evidence for a new rally on the Dow, we should be looking at the end of the 5th wave of the 5th wave Long term here. 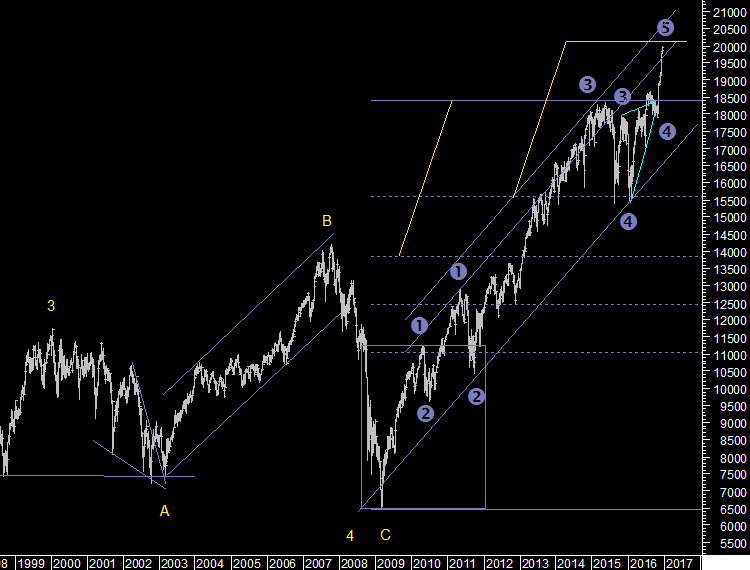