The S&P and Dow were different last week in the sense that the Dow indicated one more new high to complete 13 legs [5+4+4], to be called an impulse, which it did today, however the S&P could have been said to be there. Now both indices may have aligned.

On the Dow, starting April I noted the start of wave 5, Initially giving targets of the long term upper channel line that were achieved by Oct. In Oct I said watch the first channel where wave V could end, but we only completed wave I of V there. A new channel for wave V of 5 had to be drawn. Now the new channel has seen the Dow rise in wave waves. Currently V=0.618 times I-III. We are in wave V of V of 5 and the next turn down would complete this entire structure [unless again wave V of V becomes I of V of V, and 3=5 price wise at 25200 is achieved next; need more evidence of extentions for this]. Wave 1 was 3 months and wave 3 was eight months long and so wave 5 too here is now eight months long. So we have time equality for the extended wave. The next trend reversal then might end up being the most important for US stocks where the rise to new highs in the Dow are not being confirmed by the Russell or Transports of Nasdaq at the moment. 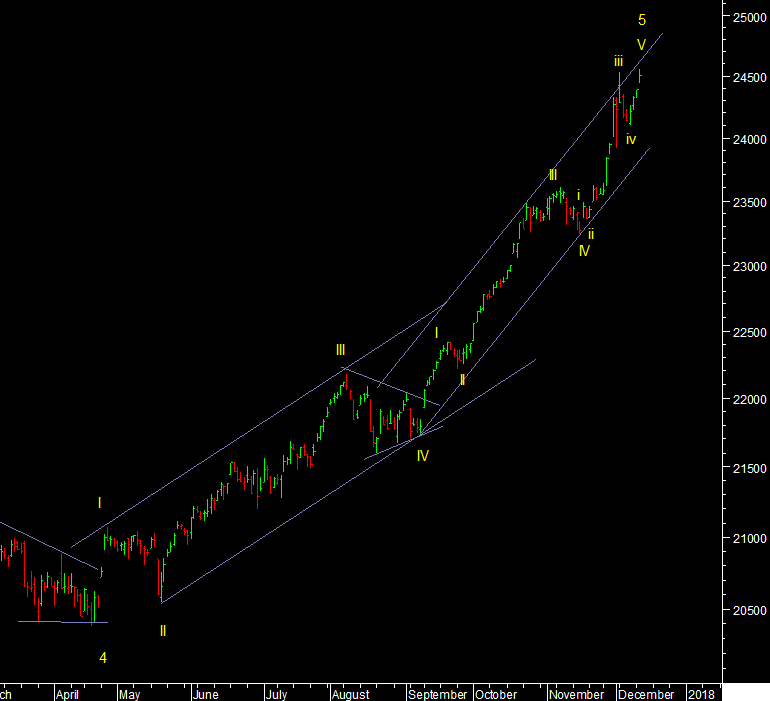