There is always a higher time frame when it comes to the market and the trend at one lower degree is dictated by a higher degree. The higher degree is where the bias comes from. A look at the 20 year period on a arithmetic scale we see that the Dow has always whipawed with the rising trendline after breaking it, making one more attempt to recover this important support before giving it up. So this pattern repeated in 2015-2016 as well. The rising channel from 2009 broke and has been conquered. However like the previous 2 occasions should this be another false move then we are just looking at the end of a counter trend move up awaiting a confirmation from daily and then weekly charts.

But you may ask why carry this negative bias that the US market has to come down? The chart below goes one time frame higher. This is the yearly chart from 1929. The Yearly momentum has been falling and in sell mode since 2002. The yearly bands are contracting but far from having reached the optimal contraction as seen in the early 1980s from where the last bull market started. The momentum reading is also not close enough to the zero line. So while you can never rule out the start of a bigger move up this set up is seen more at the end of moves on any time frame. A move up from the 20 period average in sell mode to a new high is usually the last push up in a speculative rally before it reverses. In terms of the long term channel from 1932 the Dow is pushing against the upper end of the channel repeatedly. Ideally it should go to the lower end of the channel. 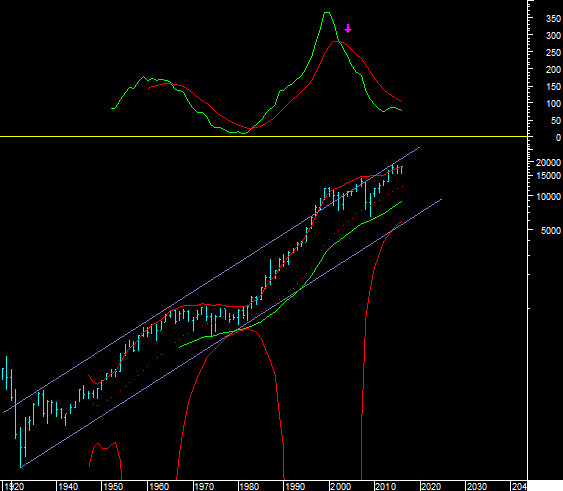 Similarly looking at the 20 year period of the NASDAQ 100 we see the potential for a major double top at the recent high. However this is not necessary given that it is 15 years apart. 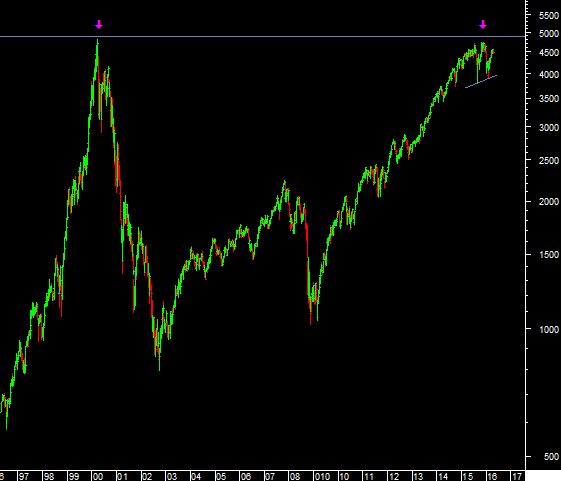 Still it is an important resistance level and the near term structure appears as a Head and Shoulders top. I may note that the Nasdaq was the strongest index during the final quarter of 2015 making a new high not confirmed by other indices. However now it has retraced less than the Dow which has gone past its Oct high. So the Nasdaq is making a lower top. Also the Nasdaq has paused at the gap down area and fell more than the other Indices becoming the first one to see its daily momentum cross over to the sell side. Volumes on the right shoulder have also be lower. I therefore think this H&S maybe relevant for the time being. The implications are that if the neckline breaks we end up at 3250 or the NASDAQ 100 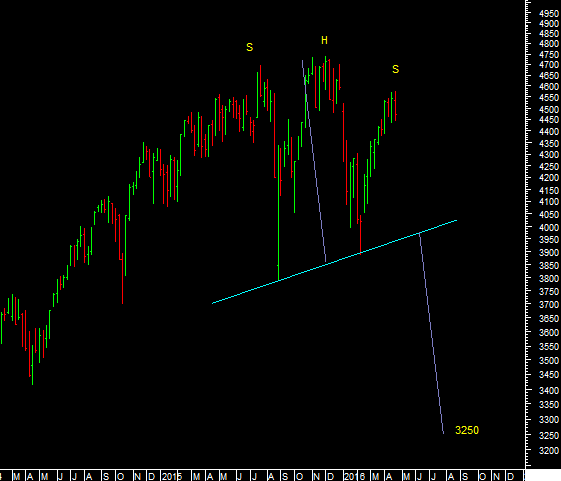