US Markets at a threshold

Yesterday i posted a sentiment chart on US markets indicating that an important high will be made soon. Today I am looking at more technical evidence that supports it. Let me start with the S&P chart.

This is a monthly chart of the S&P 500. It indicates the behaviour of the monthly momentum during 2 prior market tops and how the ROC rolled over down months ahead of the market turn. With several divegences. And tht is exactly what we are witnessing today. In July the S&P monthly momentum crossed below its trigger line to a sell and has been diverging with the main index for months. Whenever the markets reverse trend the implication of this should be a deeper correction to the lower Bollinger band and that is near the 1635 mark where the trendline for the previous tops lies. 1892 would be the 20 month average which can hold back the fall from happening as it has done before. Some times if a trend is to continue a decline in the market halts at this midway level and the trend up continues with divergences or develops into a new trend but a break below 1892 would be a final confirmation of a decline to 1635.

With that let me go into the Dow Jones Industrials index. The Dow From the Oct 2011 low is now coming close to completing 5 waves. I am using a arithmetic scale here. 5 waves requires that prices move in 5 waves from the lower end of the channel to the upper end and we are in the 5th wave up. The 5th wave has not reached the upper end yet but might be developing as an expanding triangle. And wave e is the last leg of that pattern too. so we are close to the end point but of course an actual trend reversal has not yet happened. When it does prices will falter and maybe break the lower end of the channel when they do. 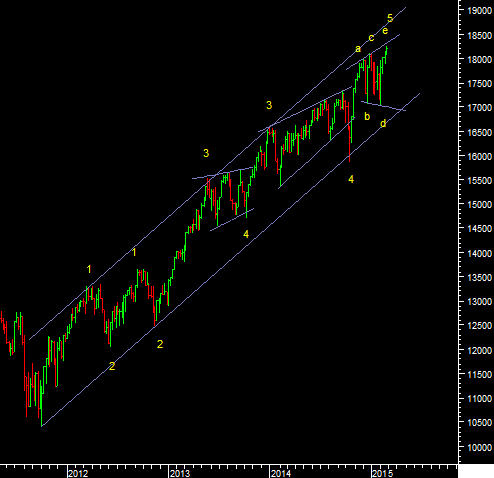 Taking it to one higher time frame Dow on the monthly charts is ending wave C [or if you are more bullish wave 3], since the 2009 bottom. It is very close to the upper end of the long term channel and so once a top occurs it should at least go to test the lower end of the channel near 16000. 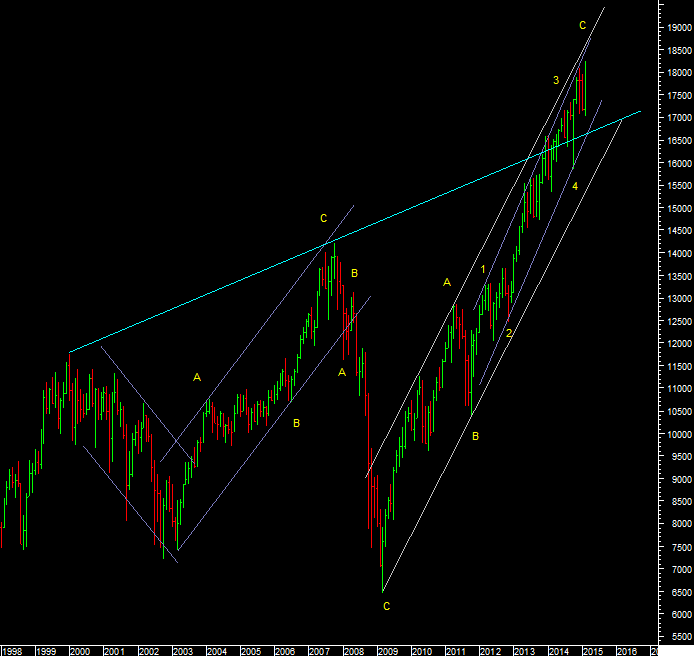