This is the fastest come back rally that I have seen on the Dow. After such a big sell off it has never happened, there is always a lag time for build up to a new high. So I wonder what it means but there is clearly rising volatility since July of this year.

The Dow transports thus became the first index to come back to a new high and come to complete the wave e of a possible expanding triangle that I discussed on the Dow yesterday. It should kiss the upper line or maybe even push above it, but it might even reverse as abruptly as it did at the bottom from up to down, for now we should stay alert to this. 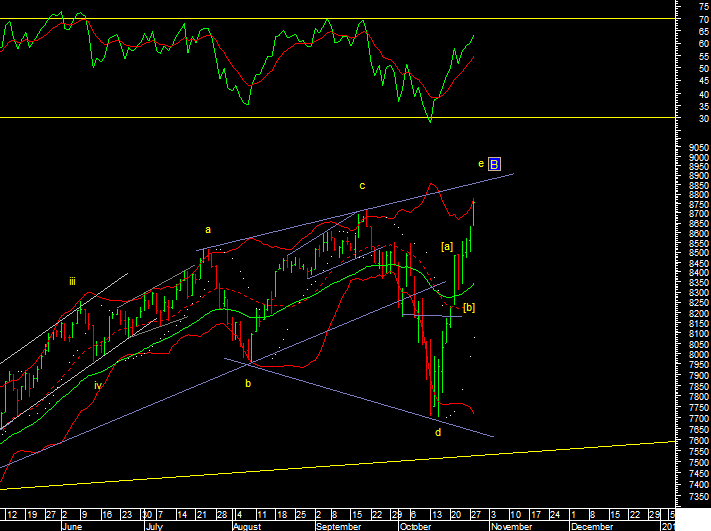 EWI put out an interim report opening up to the possibility that a new high can occur. Their last call was on 19 Sept that the top is in band on the day the Dow made its high. But most of the gains are now wiped out. What is interesting though is the acceptance of an alternate count that a new high would mean wave 5 did not end in the year 2000 but might end in 2014 is a new high forms. A new high to them would count the 2009 recovery as 5 waves. I somewhat disagree with it. The first time they marked the 2000 top decline as a series of 1-2-1-2-1-2 even as it overlapped I marked it as W-X-Y.  Then they considered 2007 as wave B of an expanded flat and still do. But I think 2007 was the end of wave 5. And they mark the 2007-09 decline as 5 waves, I mark it as A-B-C. Where I have agreed so far is that the rise since 2009 is also A-B-C, and according to me a new high in the Dow right now does not change that wave count as yet. What is interesting is that the recent top is very close to 138.2% of the 2009 decline, which as shown below I mark as wave A. So according to me the Dow is forming an expanded flat now starting from 2007 onward. The current wave B is expected to top close to 138.2% near +/- 17280. So a new high or not we are in the trajectory of a wave B expanded flat top for the Dow. The result should be a 5 wave decline in wave C down from here once a top is established. 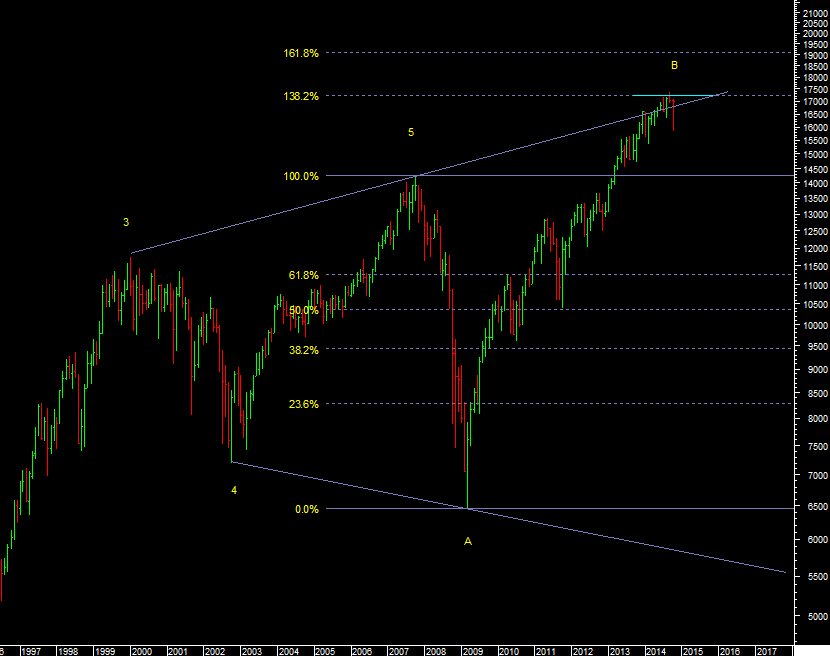