Reverse Channels on US Indices

The Nasdaq sold off with the rest of the world markets. But it fell the least. Many US indices have not broken the 40 month average and are bouncing from there. So if I draw a channel on the Nasdaq 100 connecting the highs and then the lows, I have a channel which was not broken and it makes you wonder is there one more move to a new high in here? The fall in the Nasdaq unlike the other indices does not sport a perfect 5 wave on the day down, so I cant rule this out completely.

On the Nasdaq composite I can move to a Arithmetic scale chart and draw a channel of the highs parallel and prices appear to have taken support right on top of it. Breaking these channel is essential to a full and final confirmation of a trend reversal in US Equities. Till then it is still debatable. 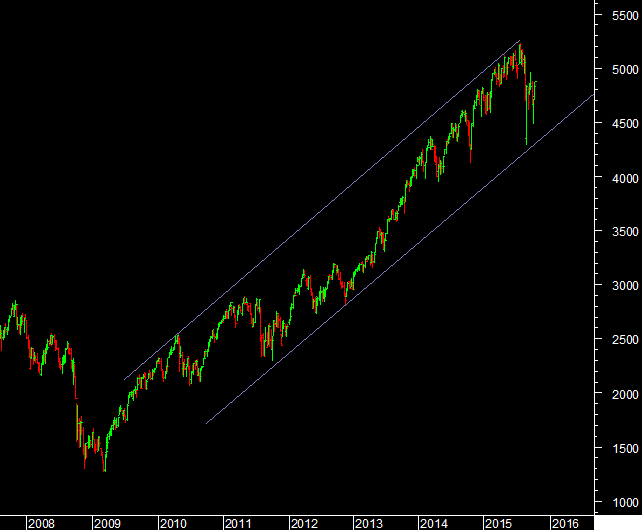 The selling in the Dow Transports provided for a good story on the Dow theory non confirmation theory. Here too take an Arithmetic scale and a reverse channel of the highs held out as support.

Also true on the S&P, so 3 or C is the big question. Many long term momentum indicators rolled over on the US indices indicating that something ended. However failure to break these channels leaves bulls open to argue the case below for one more move up. We are watching the wave structure of the current rise closely to get an idea of what is going on.