Nikkei - I felt I was being unfair to this market and decided to rework the counts. Just because 2000-2007 was A-B-C it need not be the same now.

There are several reasons.

1. Japan has been through a deflationary crash already - its past. And its lasted for 20+ years. So any stimulation of inflation is capable of starting a fresh supercycle degree bull market.

2. inflationary efforts finally work at some point of time when social mood changes and a new supercycle degree bull market starts. Fundamentalists will tell you that they have too much debt. But let me tell you so did USA in 1932 during the great depression. When GDP grew debt levels came off later due to it.

3. Wave 1 of a bull market is always a value buying rally. Fundamentals change only afterwards. In fact when wave 2 occurs fundamentals are often as bad or worse than the bottom so its normal for markets to lead.

4. Wave Z triangle as shown below occurred at the lower end of the range unlike the wave B triangle in 2003-2005. So it need not be the same. And now we have a breakout of the 20 year falling channel.

5. Lastly the USDJPY has also reversed from a multi year down trend ending wave 5 and is now in wave 1 up. A strong JPY period has ended which was deflationary.

So to conclude its better to consider that Japan is in wave 1 up now and the only stock market in the world that is starting a new long term multi-decade bull market. Fundamental will follow years later. 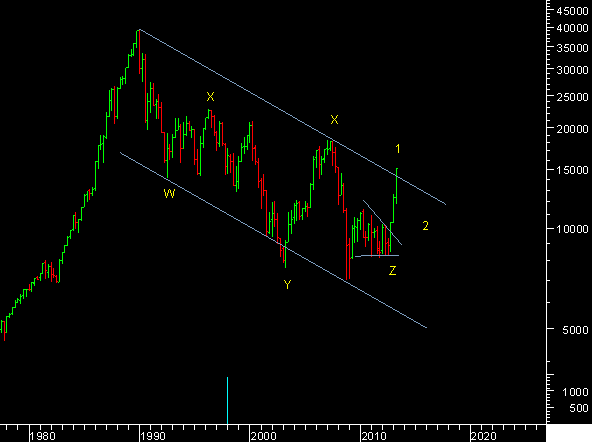