The US 2000 index broke all the swing lows even as it rebounded to close near the days high. The break means two things first that the previous consolidation in 3 waves was corrective and complete and second that wave 3 down probably started. Now the Russel 2000 retraced only a little more than 38.2% but could not go above the 40dema on both attempts. This shows the weakness of the broad market in the US as well. The Dow was probably the only index which managed a near 78.6% pullback this time in the last month. In terms of the wave count for wave 2 note that wave C was very small but counts as a clear 5 waves up, This is a truncated wave C as the A-B-C consolidation is contracting and not in a channel.

This next chart shows that at a larger degree we maybe breaking down from a head and shoulders top as well here. Note how 3 triangles preceded the final top, and since EW analysis says that triangles precede final moves the extentions and subdivisions did give us many early, or too early false signals that we were almost done here, But now we should be. A break fo the neckline at 1467 would put us in wave 3 down to much lower levels down to 1220. There is also an important EW lesson here for H&S patterns, it is ideally formed where wave 2/B is the right shoulder after a 5th wave completes at the degree of the study. With EW you could draw a line anywhere but this validates good H&S patterns. 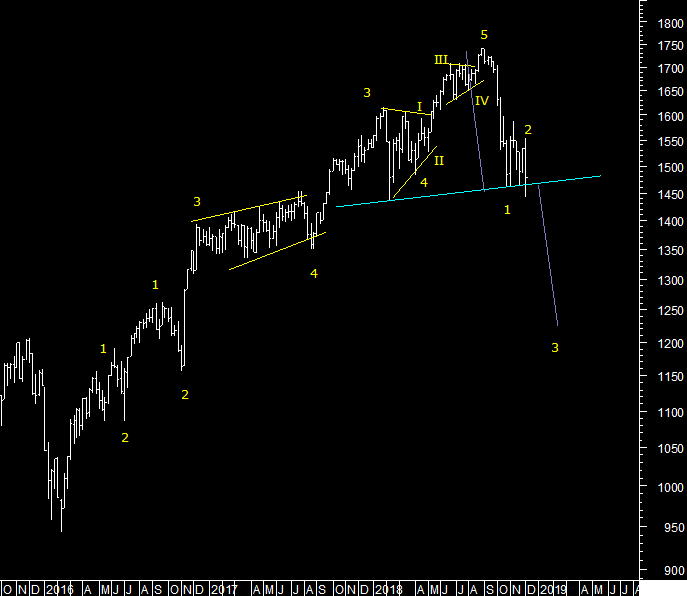