It was probably the most unnoticed but weakest part of the Asian markets today ending down 35 points. On a chart this is important because for long I have been marking the Shanghai composite as a wave B, for almost 2 years. And each bounce to a lower top has come on the back of news that they would stimulate the economy in some way. But so far nothing has been done. The risks on the other hand have been widely written about. But one that I got hold of first hand of is the sheer overcapacity that has been built out there. Someone I know visited his semiconductor suppliers there and that was the one word he had on China 'Overcapacity'. The Shanghai composite has been waiting for long to start wave C down. Wave B larger degree is a triangle and now ave E of B is also a triangle with a truncated wave e. So its taken its own sweet time and todays move might mean time is up. Wave C down is a big one for China and would only happen when its going to take that hard landing with knuckles down. The impact will be felt, if the fall continues for a few more days. 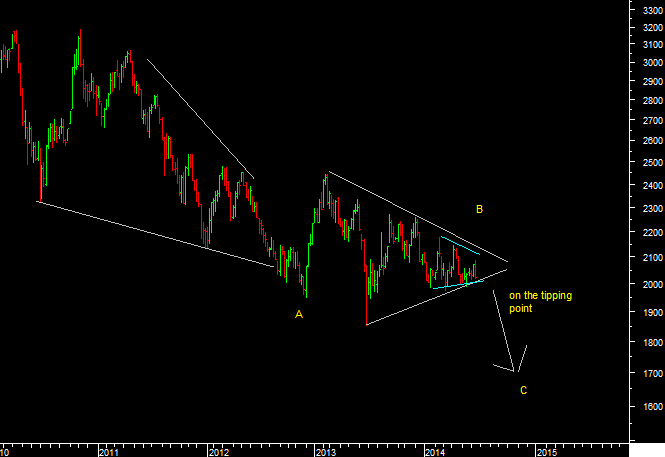